I’m Will and this is my entry for the Prismatic Corpse D&D rewrite project. I will be (oh my god) reading off a list of all the gods in D&D and saying what they are of. I had this idea and it’s just way way longer than i thought. There are maybe 25.

This is completely demoralizing right now. There’s just so many. How do you even individually even over the course of 40 years make 25 things.

I’m writing this down, no I’ll be transcribing this. Great. I can’t wait to listen to this.

I was going to say “god of evil” but the next one is Bane. You know what would be smarter, if I went one by one instead of just jumping around.

Okay, I’m going to start from the bottom because I’ve been looking at these for a while.

I’m getting some interference… we’ll play through.

I’m now just listening to the other thing, let’s see if you can hear it.

Okay, I’m back. We decided to play through but now I’m under a blanket.

Ah we’re back at Helm, which I did type for, and it is the god of helmets.

Shout me out of I nailed any of these. I think I probably got helmets.

You can hear screaming from a TV. There’s swear words. I’m literally just sitting here looking at it.

Okay, let’s make them friends. Beshaba and bane, and bhall can be their friend too. They are all friends and they play in a hardcore punk band, and Bane plays drums. Bane plays loud, can’t play very fast, so he plays cut time all the time. Beshaba is the bass player. Bhaal is a hardcore singer that takes way too long between songs. Not that hardcore frontmen take too long talking about things that are important, Bhaal is, like I said, the god of balls. It’s more just a vibe that Bhaal puts out. But the tunes are good.

Thank you, this has been all the D&D  gods from memory, goodbye. 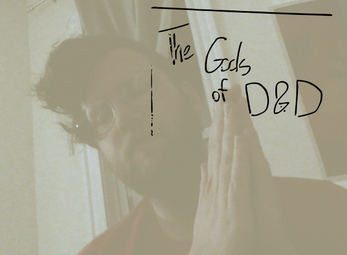