They are alone, seeking a secret place. They are dead set on getting there.

Black Mass is a roleplaying game about two people leaving a community that doesn’t want them, to the woods that calls for them. Those travelers, Lydia and Catherine, confront their pasts to seek their own black mass, a moment of transformation, to put the tools of change into their own hands.

Black Mass is a tarot-based tabletop roleplaying game played in one sitting over the course of two to three hours. Black Mass is for four to eight players, including a proctor, who facilitates the game.

Players take on portions of their personalities, called personas. We join in their successes, their defeats, and we all sign their names into the devil's book together. During a game of Black Mass, players take turns inhabiting different elements of their histories, personalities, and tendencies. Personas revolve around relationships, emotional experiences, discovery, and growth. Each persona is different and sketches out a different piece of each character. Each player gets two: one for Lydia and one for Catherine.

We play to find out who they are, why they left Salem, and what they find in the woods. Once we know that, we’ll find out what they do after their black mass.

Black Mass is a game about discovery: through play we learn about Catherine and Lydia, informed by the in-play personas. No two games are similar, and no two Catherine’s and Lydia’s are the same between playthroughs. There are ten personas for both Catherine and Lydia, resulting in many unique combinations at the table.

Throughout the game, players draw tarot cards to overcome obstacles and to add to the spread, two rows of cards in the center of the playspace. The spread represents the lives of Catherine and Lydia, each card symbolizing a moment in their past, present, and future.

Tarot cards act as action resolution and oracles. When a persona begins inhabiting Catherine or Lydia, the player draws cards from the central pile and adds those card to their personal stack of cards, called the cairn. Players spend cards out of their cairn to move silently, shrug off spectral voices, bear the cold, and negotiate their path through the woods. Only one player may act as Lydia and Catherine at a time, and when they’re out of cards, they're no longer in control.

At the end of these turns, players may add a card to the spread, narrating a scene from their present or past.

The proctor of Black Mass facilitates the game, providing challenges for the personas, and taking actions. The proctor guides the personas through the prologue, confronts them in the woods, and sets them free during the black mass.

312 backers helped bring this project to life on Kickstarter as a part of ZineQuest!

This download includes the digital zine and a suite of music (https://black-mass.bandcamp.com/album/the-black-mass-suite).

Character sheets and an action reference are free below.

Want the physical version? Grab it at goodluckpress.co.

In order to download this game you must purchase it at or above the minimum price of $9 USD. You will get access to the following files:

i think im gonna hack this

Black Mass is a 62 page, black-and-white, tarot-based storytelling rpg (and accompanying soundtrack!) set during the witchcraft accusation hysteria of the late 1600s in colonial America. It has gorgeous, evocative art and clear layout, and it's also probably one of the most complex, nuanced character studies I've seen in interactive fiction.

Mechanics-wise, Black Mass is a little similar to Bluebeard's Bride, but you play as the personas for two different characters rather than one, and the game is less of a funnel through a series of bedrooms inhabited by abusive skeletons than it is an open-ended exploration of an ominous New England woodland.

Black Mass does tackle some heavy material, but it also puts a good deal of effort into warning folks upfront, offering safety mechanics, and recommending alternatives. There's even a suggestion for using playing cards instead of tarot if people aren't comfortable with tarot---which works due to the shared history of playing cards and tarot---and this wasn't an accommodation I expected to see in a game that was already about the occult. There's also three broad modes of play, named after different months, and which allow you to pick the content, tone, and themes of your game before you start.

The game itself is divided into phases, with the first serving as a sort of communal storytelling prologue, and the second as something closer to a supernatural horror adventure game, and the third returning to the communal storytelling format. During the second phase, the rules change considerably and the game gains a fair bit of crunch (using portions of the tarot deck to make skill checks, giving the characters special abilities based on their personas, and relying on a GM to push the narrative along.) Everything is extremely flavorful, and I personally really like this shift from storytelling to mechanics and back to storytelling again---although I acknowledge it may not be everyone's preferred thing.

-Some headings display with a line through them, rather than underneath them. This looks a little weird.

-Page 48 "It emerged as the Massachusetts was settled" is the 'the' part of the intended phrasing?

-Page 48 and 49, there's some scribbles on the page that are a little jarring, and that pulled me right out of the immersion. Are these an intended element?

I haven't played this yet, and I don't have a group, so I don't know when I'll have the chance, but I have to say that just reading through the zine was a delight. You clearly put a lot of time and creative energy into it, and your writing (and the brilliant illustrations!) was fantastic at creating an atmosphere that I wanted to dive into headfirst. The personas are intriguing and the questions about them eerie and inspiring, it makes me want to start jotting down ideas. Very nice work, and thank you for including it in the bundle!

I'm down to play with you!! - i have a few friends who would be down too

Oh, that'd be awesome! Do you have a discord or something where we could talk about it more? 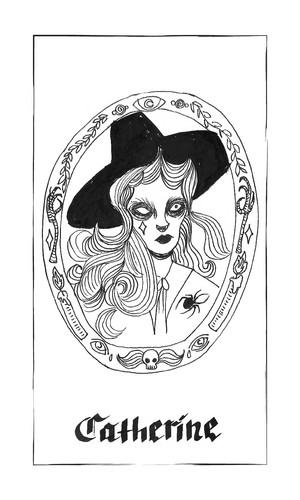 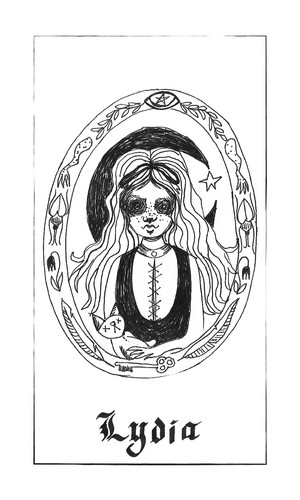 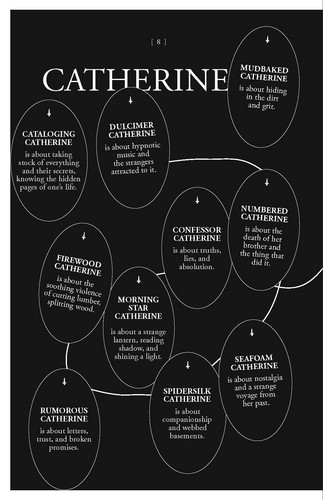 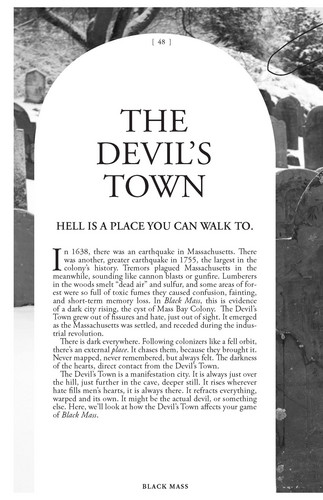 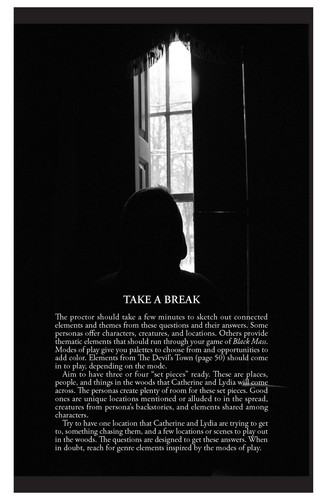